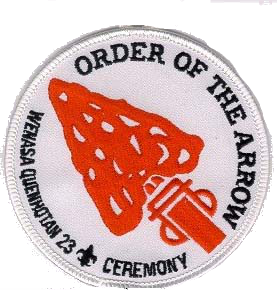 The Ceremonies Team is responsible for all aspects of our induction ceremonies. The exception is the Vigil Ceremony, which is conducted by the Recognition Team. We are always looking for more members to get involved on the ceremonies team. There are several ways to get involved with ceremonies.

There are four speaking roles for each of the three main induction ceremonies – Pre-Ordeal, Ordeal, and Brotherhood. Arrowmen who participate in these ceremonies must be skilled at line memorizing as well as personifying the character of their respective principal. The speaking roles are the most visible members of the ceremonies teams. Training opportunities are offered throughout the year to prepare members for the actual ceremony. It is very helpful to have several members throughout the lodge that know the different roles. Anyone in a speaking role must be under the age of 21.

The scripts for the ceremonies are available from the current Ceremonies Chair.

The torchbearer’s job is to lead the group of candidates from their meeting point to the actual ceremony site. This is often a good introductory role for anyone wanting to become more active on the ceremonies team.

In order for ceremonies to be conducted as efficiently and impressively as possible, it is essential for the ceremonies team to have volunteers to prepare the ceremony sites. Jobs on this crew often include weed-whipping the site/trail, setting up torches in a circle according to the particular ceremony guide, filling torch canisters with kerosene, building/lighting/putting out the fire, hanging up sashes, displaying ceremony props.

During the ceremony, this crew also helps to subtly add wood to/light the fire if necessary (or in between multiple ceremonies, if this is the case). When there is a large group of people receiving new sashes, they also assist the principals in putting them on the candidates.

The lodge has created an incentive program that gives ceremonies team members the opportunity to earn patches for their participation in ceremonies. Follow the link to learn more.